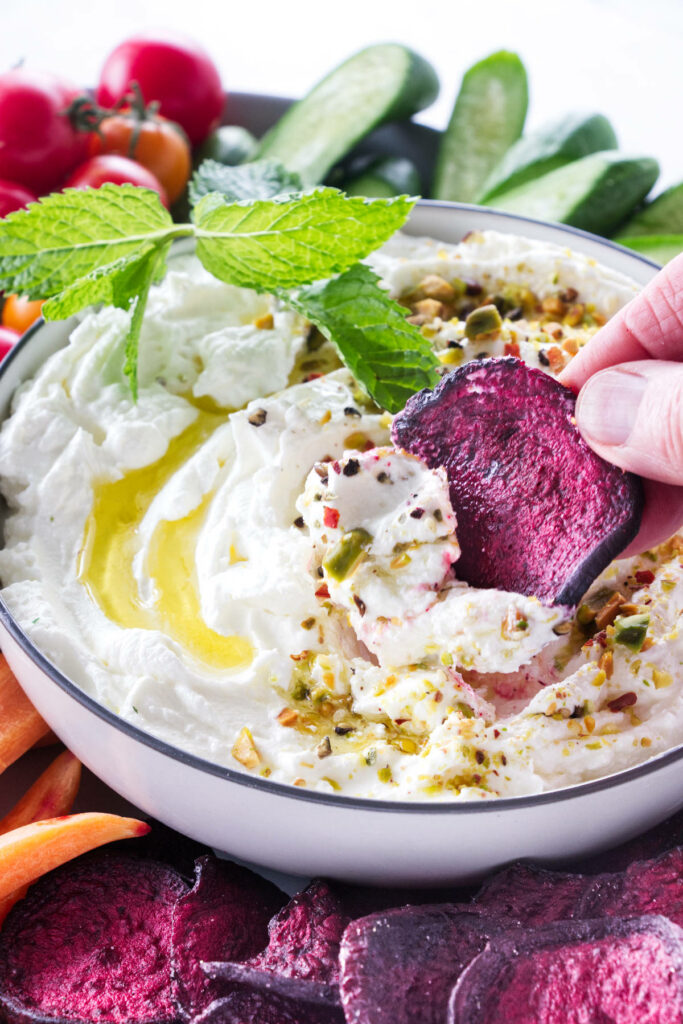 Labne is strained yogurt that is common in Middle Eastern cuisines. It is much thicker than Greek yogurt and almost as thick as American cream cheese. It is so thick it is sometimes called labne cheese or yogurt cream cheese. With its rich and creamy texture, you’ll love that this yogurt cheese has fewer calories and more protein than cream cheese!

To be clear, this recipe for labne cheese is not actually cheese but is frequently referred to as cheese due to its thick and creamy texture. Labne is made by straining yogurt to remove the whey, resulting in a much thicker consistency.

Homemade labne is decadent, velvety, rich, and so simple to make at home. This cheese-like yogurt is a popular Middle Eastern dish that is used as a dip or a spread. You can serve it as a sweet or savory dish that pairs well with crackers, fruit, or vegetables.

Just like Lebanese hummus and hot crab dip, homemade labne always beats the store-bought variety, and it is so much cheaper to make at home! You just can’t find the same flavor and texture in a package from the store.

You might also see this cheese dip spelled labneh, labaneh, or labnah. No matter how you spell it, it is the same thing; yogurt that has all the whey strained out.

You’re left with a thick cheese that you can spread on vegetables or pita for a crowd-pleasing appetizer or snack.

Why This Recipe Works

If you want a delicious variation of this labneh cheese recipe, try our beet labneh which has roasted beets blended into the creamy labneh cheese.

You only need two ingredients to make labne at home! Scroll down to the printable recipe card for all the details.

How to Make Middle Eastern Yogurt

Making homemade labne is a really simple process but does take 12-18 hours of hands-off time to finish. Here’s how to make it:

You can also drizzle labaneh with honey or maple syrup and top it with fresh fruit and granola for a sweet treat.

I stirred a small amount of the Lebanese garlic sauce into a portion of the drained yogurt along with some fresh thyme and Wow! it was good!

How to Serve Labne

From toppings to crudités, try these ideas for serving this dip:

Top with: Extra virgin olive oil, za’atar, red pepper flakes, and fresh herbs such as parsley, mint, or dill. If you want a sweeter dip, drizzle with honey.

Spread it on thick slices of toasted baguette and top with sundried tomatoes for a delicious bruschetta.

How to Store it

Store this thick and delicious yogurt cheese in an airtight container for up to a week in the refrigerator. You can also freeze labneh for up to three months.

Labne has the texture and richness of cream cheese with fewer calories and fat. It’s a healthy and decadent dip that is high in protein and gut-healthy probiotics.

What is the difference between labne and yogurt?

Labne is made from yogurt but is much thicker because nearly all of the whey gets strained out.

Some of the following are affiliate links. We may receive a small commission if you click on these links and purchase something. You don’t pay any extra, but it will help us keep the lights on.

Lebanese Tabbouleh is intensely fresh and flavorful. It makes the perfect side dish for Lamb Pita with Tzatziki sauce.

You’ll be craving these Braised Green Beans when the weather cools down. Flavored with rich tomato sauce and warming Lebanese spices, the instant pot makes this recipe easy!

This recipe was originally published on February 27, 1015.

Hi, Emily....Welcome to our blog! I'm so happy you enjoyed our recipe and hope you find more recipe ideas within the blog. :)

Hello, I think your website might be having browser compatibility issues. When I look at your website in Firefox, it looks fine but when opening in Internet Explorer, it has some overlapping. I just wanted to give you a quick heads up! Other then that, superb blog!

Thanks, I will check into it but so far I don't see a problem with the site on Internet Explorer