This Watercress and Roasted Beet Salad makes me happy!  I love the spicy, peppery taste of watercress and the sweetness of roasted beets.  Combine those unique flavors with a tangy, creamy feta cheese dressing and, voilà!  An award-winning, fresh springtime salad! 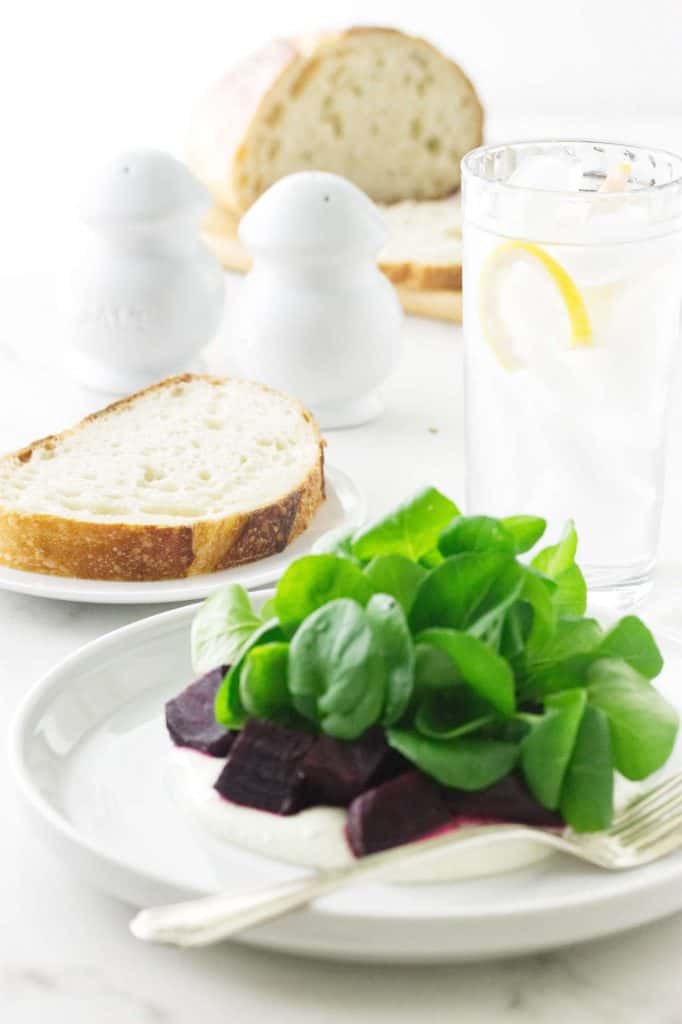 Just a few simple ingredients of crisp watercress, roasted beets, a creamy, feta cheese dressing and you can have an elegant starter salad for a really special dinner.

This crisp green plant gets it’s spicy, peppery taste from its cousins the radish, horseradish, and mustard. Watercress is a fast-growing plant that grows in the wild along the edges of creeks and streams.  The hollow stems of the plant keep the succulent leaves afloat.  Because the stems are also tough and chewy they are usually discarded during preparation for eating.

Watercress is found growing wild in the early spring from April through June.  However, it is also grown commercially in greenhouses and available throughout the year.

To make our Watercress and Roasted Beet Salad:

Our watercress and roasted beet salad is a simple salad using just the leaves and the short tender portion of the stems.  First, we cut the roasted, chilled beets into bite-size cubes. Next, they are arranged on a mound of feta cheese salad dressing with the watercress added on top with a drizzle of olive oil.  All the components can be made in advance and held in the refrigerator until ready to assemble and serve. 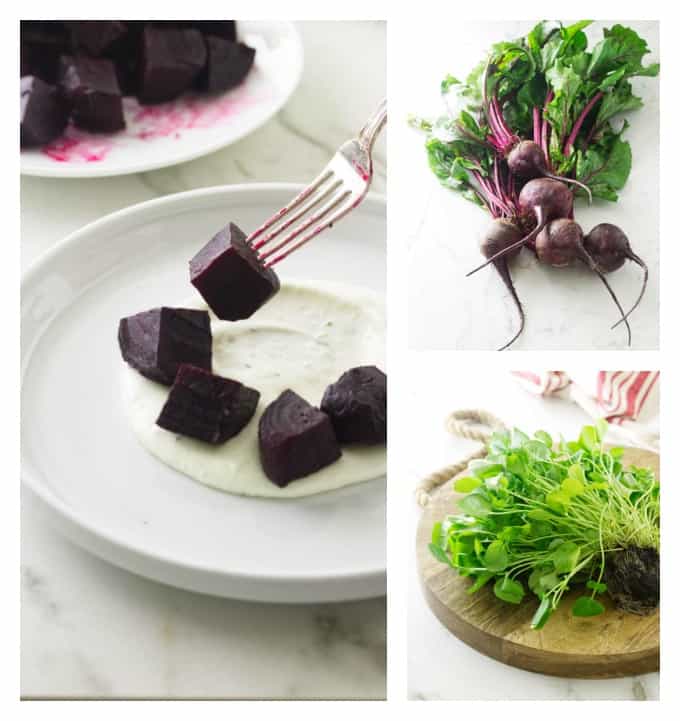 Other uses of watercress:

Combining watercress with field greens is another avenue to enjoy this lovely crisp green herb.  Watercress is not just for salads though.  The zesty taste of this vibrant leafy green is wonderful in:

What’s the big deal with beets?

Oh, yes!  Beets are a big deal!  The nutrition level of beets is above and beyond the clouds.  They are low in calories, high in fiber and have a microscopic amount of fat.  I’m sure we have all seen the infomercial on television of the beet powder and their claims of the high nutritional value.  I personally love the beet chips that I found in the bulk food section of my local market.  So delicious, crisp and crunchy.  They also have way fewer calories than a potato chip!

Growing up my mom would make pickled beets in Mason jars with the red beets.   She would save the pickling liquid and add peeled, hard-boiled eggs.   We loved those bright red-colored eggs!  Sometimes, for a dramatic special effect, she would just crack the shells of the eggs but not remove the shells then add them to the jar.   After sitting in the liquid, they would be a beautiful marbleized red/white egg.

Not all beets are red; they grow in yellow, white, candy-striped, orange and purple/red. Enjoy the earthy, rustic flavor of beets in any of the following:

Don’t throw out those beet tops as they are also very nutritious.  They can be steamed, sautéed, braised, added to soups and stir-drys or eaten raw in salads.   Try sautéing them with olive oil and sprinkling with bacon crumbles.

To prepare our Watercress and Roasted Beet Salad:

First, the leafy green tops of the beets were cut off about on inch from the top of the root.  The long tail was left uncut to keep the juices from leaking out.  After scrubbing the beets to remove any soil, they were drizzled with olive oil, wrapped in foil and roasted in a hot oven for almost an hour.  You will know they are cooked properly when a sharp knife inserted right at the top slides into the beet with just a little resistance.

After the beets have cooled enough to handle the skins should wipe off easily with a paper towel and cold running water.  Place the peeled beets on a paper towel-lined plate and refrigerate until icy cold. When chilled they can be cut any way you want, slices, wedges, cubes or julienned.  I like the cubes for this watercress and beet salad.

Cooked beets will keep for up to a week in the refrigerator, so with planning, this can be a really easy and quick salad to put together. 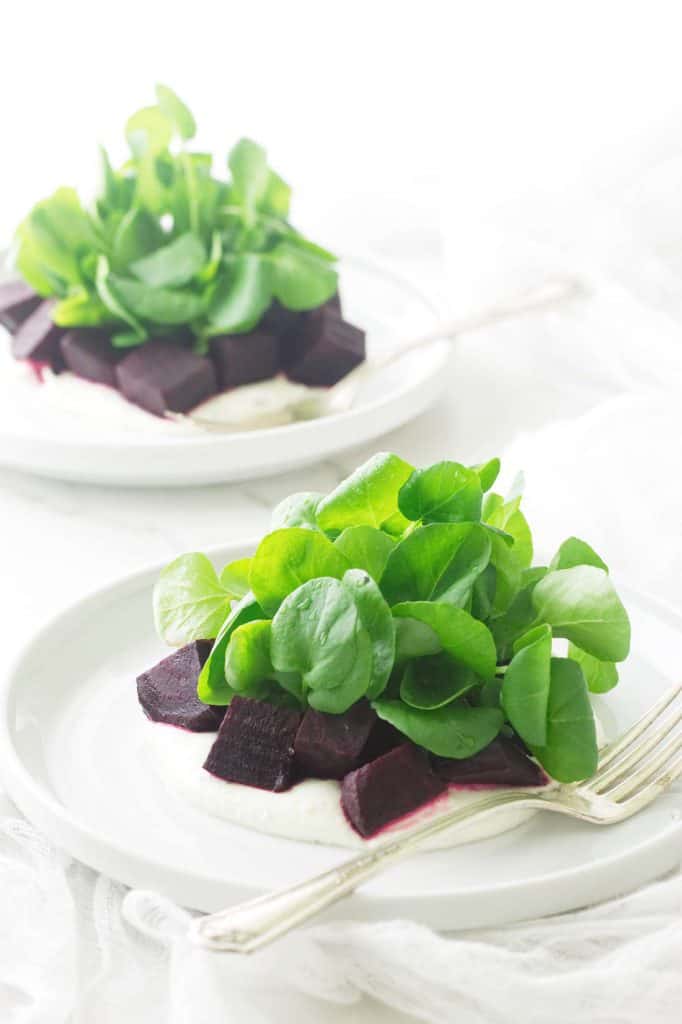 Here is a tip I learned from my son, Burl:  When preparing the watercress in advance, leave the root ball attached until ready to assemble the salad.  Rinse the greens with cold water and shake gently to remove excess.  Wrap the entire plant loosely in several layers of paper towels.  Sprinkle the towel lightly with cold water and slip the bundle into a closable plastic bag and refrigerate until ready to use.

I have found that this technique also works really well with those tiny packages of expensive fresh herbs.  I just remove them from their package, rinse/dry and wrap them.  They stay crisp and fresh three times longer than in their packaging.

Have you made this Watercress and Roasted Beet Salad? We would love to hear from you. 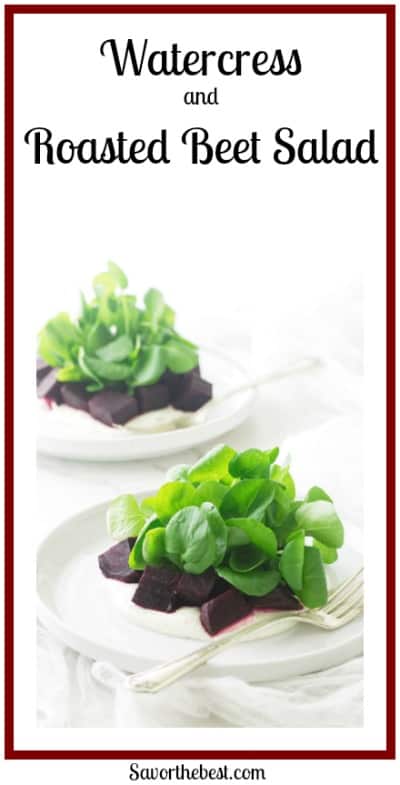 We are Pat and Dahn, a mother and daughter team who live in the  Pacific Northwest. We spend  most of our time together in the kitchen, the busiest room in the  house. We love to cook, bake, entertain and develop new recipes  for our readers who share our passion for delicious, from-scratch food. We developed Savor the Best in 2013 to help inspire readers to enjoy their kitchen, grow their culinary skills, and savor good  food every day.
Previous Post: « Roasted Apples and Aged Goat Cheese
Next Post: Our South African Safari » 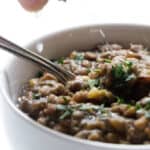 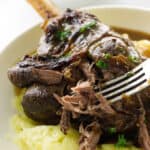