How quickly this year has progressed, here we are marching along to the end of 2015 and Thanksgiving is upon us.

For our family, roast turkey is traditionally the main event for Thanksgiving along with all the trimming of stuffing, mashed potatoes, gravy and cranberry sauce.  And, of course, pumpkin pie!

Methods of Roasting the Turkey:

There are so many ideas for preparing ‘the bird’ for roasting such as:

Mostly, though, I just buy a frozen turkey, stuff it and roast it.   Maybe I should try some of the more non-conventional ways to roast Mr. Turkey.   How about a sous-vide bird?    Or, we could do the scalding trick or even deep-fry it or roast it in a brown-paper bag.  I have heard of cooking it at 500 degrees for one hour, turn off the oven and leave it there for several hours.   Hmmmm….

Usually, I buy one of those frozen turkeys that the grocery store offers a great discount for if you spend the magic number of dollars on groceries as advertised.  They always tasted just like turkey, sometimes better, sometimes worse.

This year, I bought a fresh turkey for the first time and it had not been injected with fluid.  It was more expensive but it also was the moistest, juiciest turkey I think I have ever roasted.

I used the drippings for gravy with some white wine and it produced a rich, dark, flavorful gravy, although there was a lot less of the drippings than I had expected.  That may have been because it was a fresh turkey and had not been injected with fluid.

I prepared Mr. Turkey by first preheating the oven to 425°F.  But then reduced it to 325°F after the turkey had been in the oven for 30 minutes.

The total roasting time was a little more than three hours, (13 minutes per pound).  A good reliable meat thermometer should register 165°F in the thigh and stuffing indicating the turkey is cooked.

How to Get a Crispy Skin on the Roast Turkey:

I wanted a crispy skin so reluctantly passed on basting it.  By allowing the unwrapped turkey to sit at room temperature for 30 minutes prior to preparing it for roasting, the skin had dried out just enough so it roasted up crisp and tasty.

I did cover the breast area half-way through the cooking time to prevent that area from over-browning.  And, to keep the skin crisp I did not cover it with aluminum foil while resting because the steam will soften the skin.

When we sliced into the turkey breast it was moist, tender and delicious, I will definitely go the ‘fresh’ turkey route again.

Fresh sage has a unique flavor that enhances the stuffing.  There is a large bush of sage growing in my garden and I picked a nice bunch which was chopped and added to a sage, lemon and mushroom stuffing.

Most of the stuffing went into a baking dish which was baked separately and I just lightly stuffed the main cavity of the turkey with part of it.

There is a health safety reason why the turkey should not be stuffed and that is the stuffing may not be fully cooked by the time the turkey reaches temperature.

However,  I solve that issue by transferring the stuffing to a serving dish after the turkey has rested.  Then I zap it in the microwave long enough to reach the safe 165°F temperature. 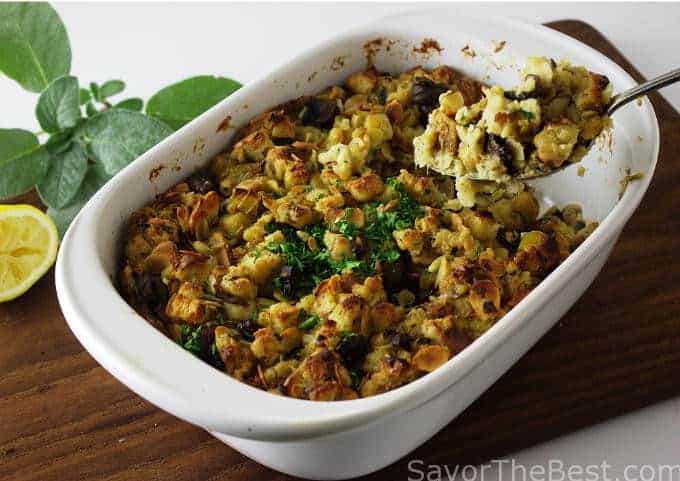 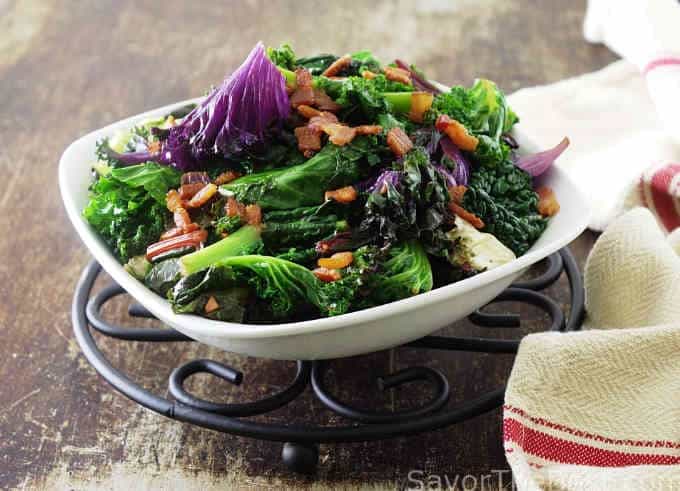