Skip to Content
This post may contain affiliate links. Please read our disclosure policy. As an Amazon Associate, I earn from qualifying purchases.
Jump to Recipe

How are you planning to celebrate on New Year’s Eve? Out dancing and parting till the wee hours? Or maybe a quiet home party with family and friends or a simple marathon movie night?

You can absolutely pull this off even after ringing in the New Year and sleeping late on New Year’s Day. What makes this ham so easy to prepare is that it is fully cooked to begin with! All that is needed is to reheat it and apply an exotic orange bourbon glaze to give it a sweet-savory, caramelized crust on the edges.

A ham is a cut of pork from the upper part of the pig’s leg.  When buying a ham, you have choices….a whole or a half ham, a bone-in or a boneless ham. A spiritual cut or even a canned ham.

Check the label to see if it is fully cooked.   If it is fully cooked it will only need to be heated.  Do not depend on just a timer for doneness.   Use a good, reliable digital/probe thermometer for accuracy.   According to the USDA’s Official Website, a fully-cooked, store-bought ham should reach an internal temperature of 140°F.

Any glaze for a baked ham should have a balance of sweet and tangy flavors to compliment the salty taste of the ham. The sweet should contain either, honey, maple syrup, molasses or brown sugar to develop that amazing caramelized crust on the surface of the ham. The tangy part can be a citric juice, vinegar or mustard or a combination of these flavors.

Our orange bourbon glaze includes all these elements of sweet and tangy plus we added grated garlic and fresh ginger root for an additional savory flavor.  That measure of aged bourbon compliments the smoky-salty flavors of the ham.  BTW…the alcohol in the bourbon cooks off.

Here is how we made our Orange Bourbon Glaze:

This easy to make glaze has a savory, sweet and tangy flavor and will be amazing on the ham. Make a double batch and keep half of it in a sealed jar in the fridge to glaze pork chops, meaty pork ribs, broiled salmon or chicken.

When to Glaze the Ham:

It is important to not apply the glaze to the ham too soon as it will burn. Let the ham cook for 75-minutes to begin warming.  Then, brush the glaze on the ham every 10 minutes to get a rich caramelized crust on the edges. 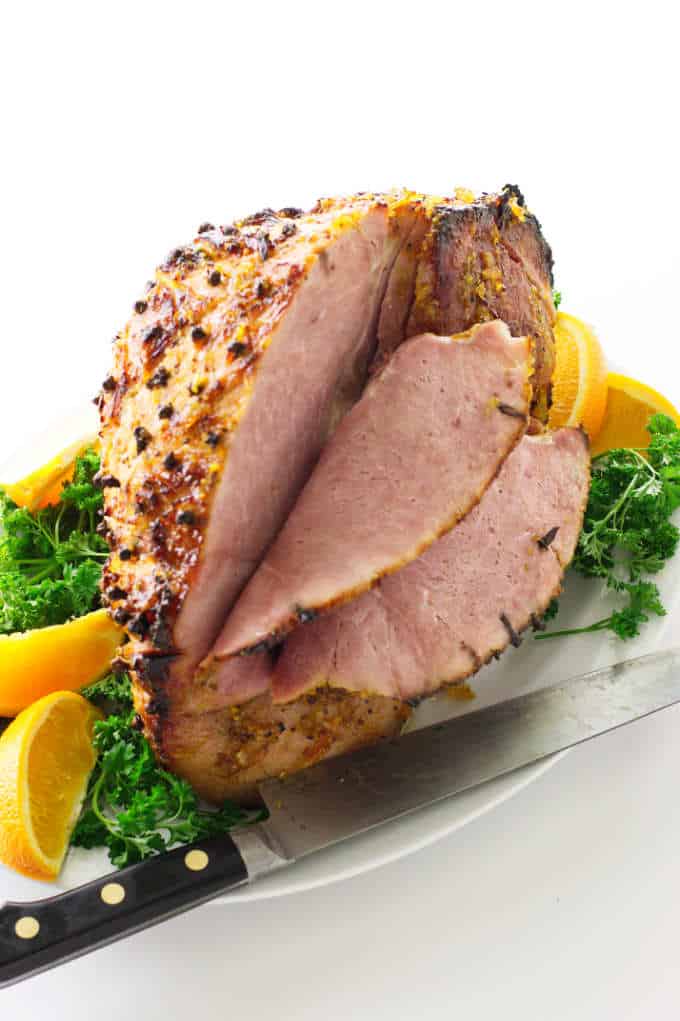 A baked ham makes a stunning centerpiece for any dinner and is especially nice for a large gathering.  Suggestions for accompanying sides are:  Potatoes Au Gratin,  Easy steamed green beans and a crunchy Apple Salad.

So what’s for dessert??  Oh, my….we’ve got you covered here!  Bake up this decadent, fudgy, Triple-Chocolate Cheesecake several days in advance and leave an unforgettable impression on your guests.

According to the USDA's Official Website, a fully-cooked, store-bought ham should reach an internal temperature of 140°F.

That's a masterpiece! I am drooling terribly :-) Wish you and yours a wonderful holiday season, Pat!

Thank you, Angie...and a Merry Christmas and a Happy New Year to you and your family!