From the very first bite, this chocolate amaretto-espresso mousse cake is a taste sensation!  You will be delighted as you dip your spoon into the top layer of the decadent, chocolate espresso mousse.  Move on down to the next layer and experience the flavor of this rich, fluffy amaretto mousse.   The base layer is a moist fudgy, gooey, chocolate brownie loaded with crunchy cocoa nibs.   Oh, yes, please! Our grandson Josh, married his best friend Sara this last weekend. Dahn and I made individual mousse tower desserts to serve at the rehearsal dinner. This chocolate amaretto-espresso mousse cake is a larger version of the mini-tower desserts served at the wedding rehearsal dinner for Joshua and Sara.

We baked the brownie base in a nine-inch springform pan.  When the brownie cooled,  we lined the pan ring with a parchment paper collar.  The collar extended above the rim of the pan ring to provide height and stability for the two additional mousse layers.

Although the instructions listed in the recipe card look daunting, this is not a complicated dessert.   You can easily construct it by stages in advance and frozen.  This mousse cake is rich, decadent and a thin slice is very satisfying.   You also have the option of creating the individual mini-towers that Dahn and I served at the rehearsal dinner. 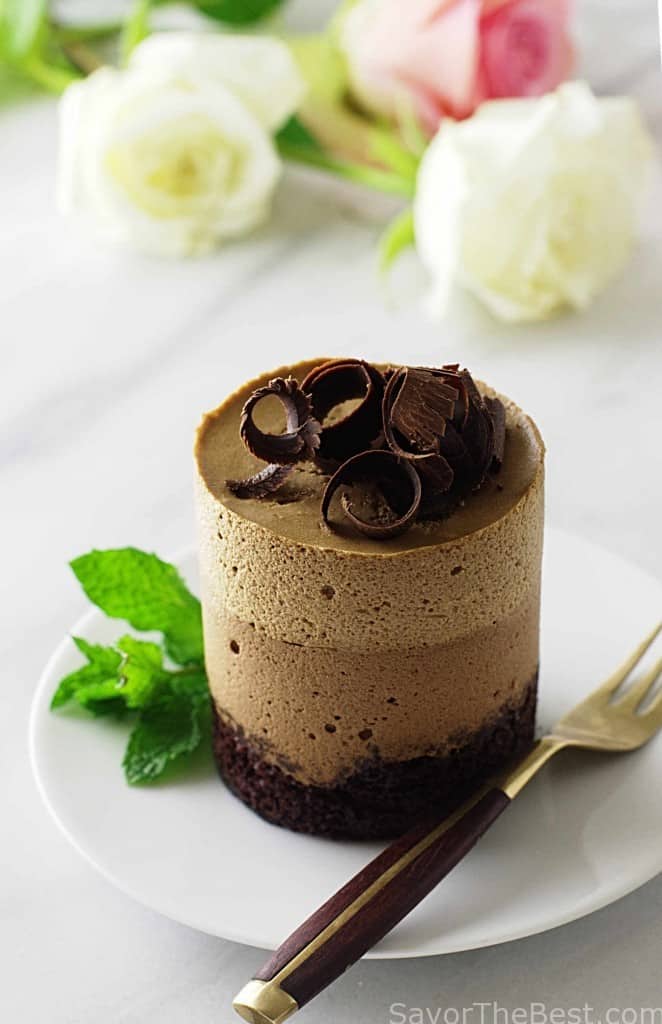 Our grandson, Joshua, and his new bride, Sara, had a beautiful wedding on July 30, 2016.   Dahn and I were honored to prepare the dessert for the catered rehearsal dinner.

This Chocolate Amaretto Espresso Mousse Cake May Also be made as Mini-Mousse Towers: 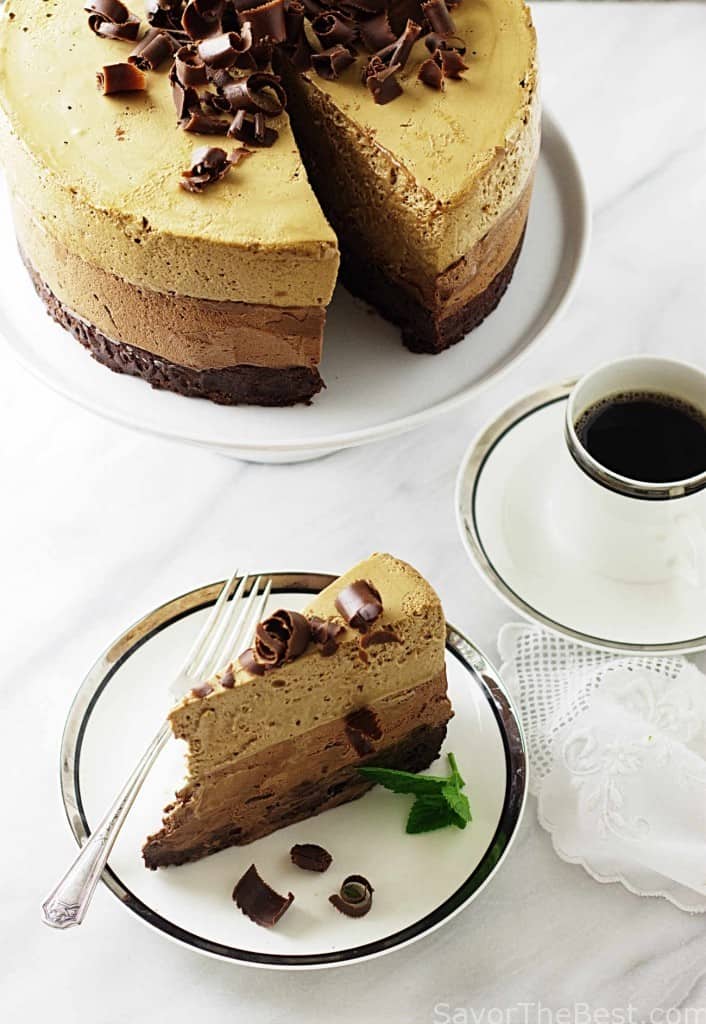 Yes, that does sound overwhelming, doesn’t it!  But… this was a fun mother-daughter project and it was prepared in stages which prolonged our ‘fun’ time.   The bottom layer was from our recipe of einkorn brownies with cocoa nibs.   The brownies were baked and prepared an entire month in advance.

After the brownies were baked and cooled we used a cookie cutter to cut the seven, eight-inch square brownie sheets into two-and-one-half inch circles.

After they were cut they were frozen, vacuum sealed and placed back into the freezer until we were ready to make the two additional layers of mousse. 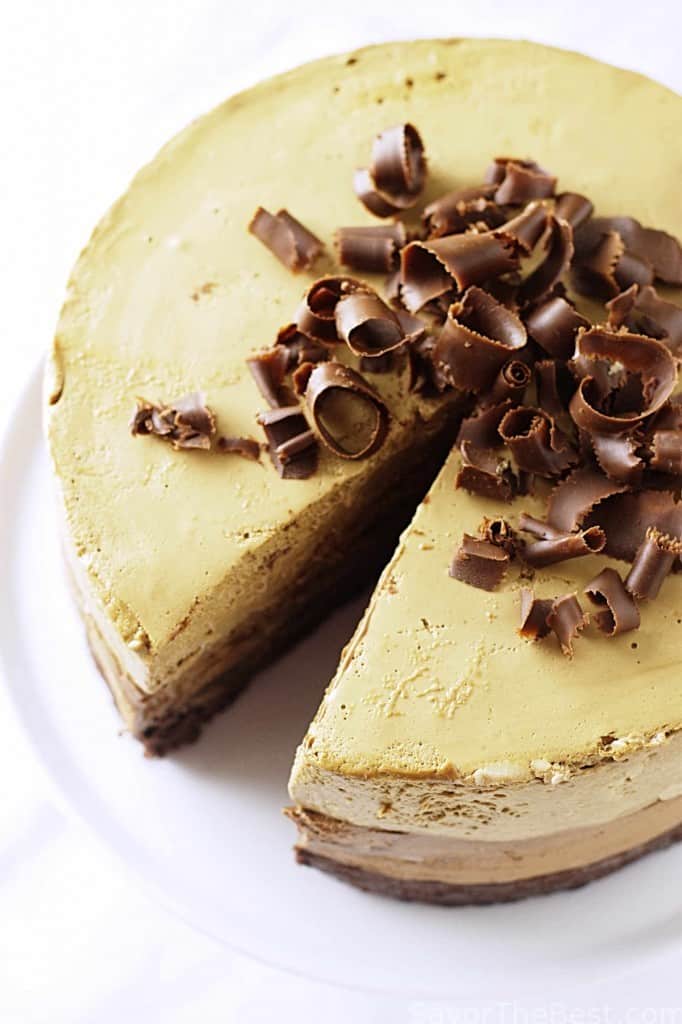 One week before the wedding Dahn and I spent an entire day preparing and assembling the additional two layers of mousse.   We used our recipe for chocolate amaretto mousse as one layer and altered the recipe using milk chocolate and espresso instant coffee for the top layer.  Since milk chocolate makes a thinner mousse we added a little gelatin to give it stability.

Each brownie round was wrapped with a three-inch clear acetate collar, and assembled with the brownie as the base bottom layer, then the amaretto mousse layer and the espresso mousse as the top layer.

They were then finished off with the chocolate curls.  The acetate cake collars can be purchased here or you can make your own from parchment paper as directed in our recipe.

It was nearly a three-hour drive from our house to the venue site.   We needed to transport the mousse tower desserts frozen and in coolers two days before the rehearsal dinner.

We were fortunate to have enough freezer space at the venue for all the desserts.  The clear acetate collar was left on the desserts which protected it during travel time.   The collar was removed while they were still frozen just before serving.   After removing the collar and a two-hour refrigerator-thaw they were served and consumed with delight. 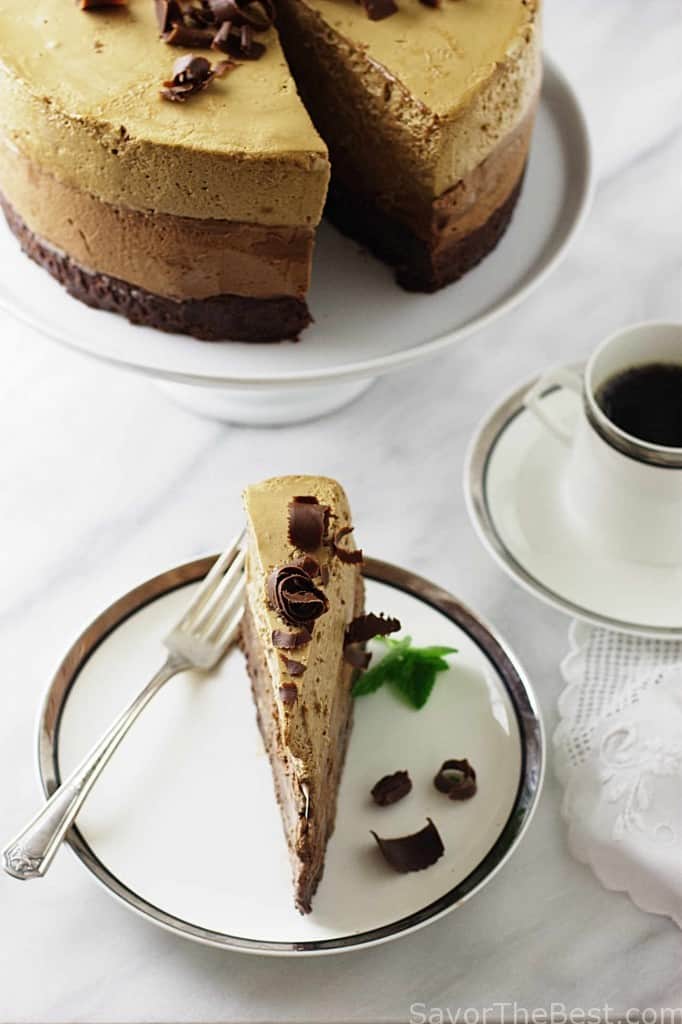 The wedding venue was held on Saturday at Ashe & Alder, which is located in a valley surrounded by the Cascades and with the White Horse Mountain as a backdrop.  Owners, Sean and Cecillia are very organized and have a beautiful venue.   The wedding was an evening event attended with more than 200 guests.  Lights were strung up in the trees and around the dance floor which provided a lovely ambiance.

This was the first non-traditional wedding that I have ever attended.  More than 200 guests attended the event and it was catered by Nosh, a Seattle based food truck.   They served an impressive, savory fried rabbit, a hefty, delicious meatloaf sandwich and the best fish and chips that I have ever tasted!

Josh and Sara had seven bridesmaids, seven groomsmen, the cutest curly red-haired toddler named Kinsley, as flower girl and our five-year-old grandson, Sheamus as ring bearer.  Even their two furry pooches, Riquour and Turbo, were walked down the aisle by Joshua’s dear cousin, Maddie and good friend Russel to witness this event.

It was so special that Joshua chose to escort each set of parents and grandparents down the aisle to their seats.  Sara looked beautiful in her dress and was escorted down the aisle by her mother and father; one parent on each side of her and they both handed Sara off to Joshua.

Sara’s brother, Evan played his saxophone during the procession, then he officiated the vows and pronounced them husband and wife!

P. S.   Seeing as this is better enjoyed if you believe it is a ‘Calorie-Free’ dessert I will not be posting the nutrition values…..Pat 🙂

For the Brownie Base Layer:

For the Amaretto Mousse Layer:

To Make the Espresso Mousse:

To Make the Brownie Base Layer:

To Make the Paper Cake Collar:

For the Amaretto Mousse Layer:

To Make the Espresso Mousse:

When preparing the espresso mousse layer, be sure to hydrate, (bloom) completely in the cold water before mixing it with the hot liquid. Also, ensure that it is thoroughly dissolved in the hot liquid before proceeding with the recipe.

We are Pat and Dahn, a mother and daughter team who live in the  Pacific Northwest. We spend  most of our time together in the kitchen, the busiest room in the  house. We love to cook, bake, entertain and develop new recipes  for our readers who share our passion for delicious, from-scratch food. We developed Savor the Best in 2013 to help inspire readers to enjoy their kitchen, grow their culinary skills, and savor good  food every day.
Previous Post: « Saigon Chicken Salad
Next Post: Blackberry-Feta Salad with Mache » 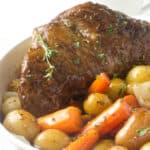 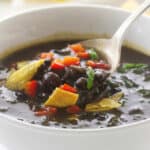 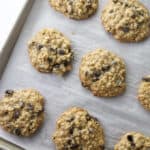 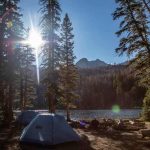